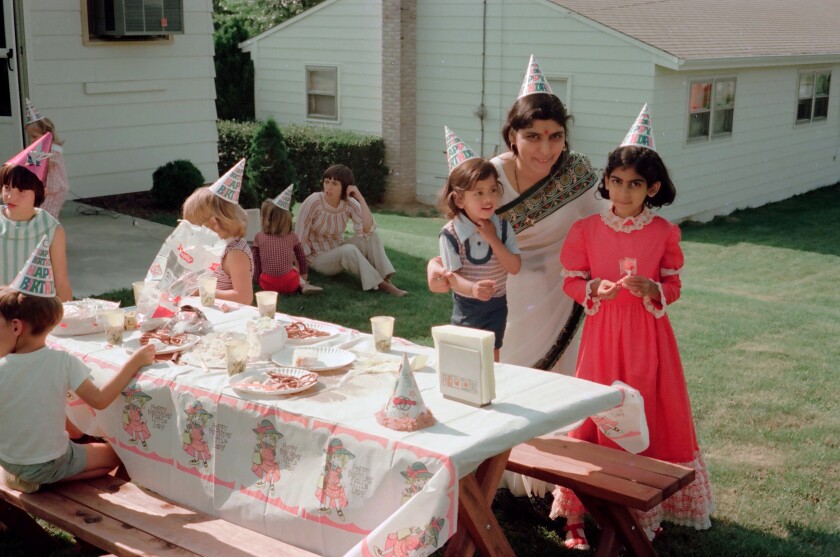 Chicken curry is bubbling on the stove. The rich scent of garlic, ginger, coriander and Indian chili powder fills the air. Check the basmati rice. It’s almost done. Take a sip of your Mumbai Mule — feel that vodka kick? Now, turn your attention back to your laptop screen. Sri Rao has something important to say.

He stands by his stove in New York’s Hell’s Kitchen, wearing a smart suit jacket and a collared shirt with no tie. He’s cooking what you’re cooking, and he’s explaining what the dish means to his family. He’s the child of Indian immigrants, and he learned about his heritage largely through food and film — particularly the spectacularly colorful musical movies of Bollywood.

Rao is weaving clips from those films into a livestream from his hearth to yours as part of a new one-man show called “Bollywood Kitchen,” which is airing through the Geffen Playhouse’s virtual platform, Geffen Stayhouse, through March 6.

As a television writer and cookbook author, performing is new to Rao. When the Geffen’s artistic director, Matt Shakman, approached him about bringing “Bollywood Kitchen” to the Stayhouse, Rao had been working to develop the show into a full-blown dinner-theater musical (not featuring him) with its director, Arpita Mukherjee.

Mukherjee is the artistic director of New York’s Hypokrit Theatre Company, and she still has high hopes for producing it there. That version, she says, will feature a live band, actors, dancers, food and lots of Bollywood visuals. She describes the Stayhouse version as a pared-down workshop on a professional scale.

“I think we will have accomplished something if you feel like you are at Sri’s apartment for a dinner party,” Mukherjee says. “There will have to be this intimacy about it that grows as you go through the evening, and as it does, it stops being polite and it gets more real.”

It can’t get more real for Rao, whose apartment is a tangle of sound and lighting equipment, cameras and gaffer tape. As COVID-19 necessitated the shift to streaming theater, streaming theater has found its ways into performers’ homes as a way to minimize risk.

During the show, safety regulations allow for only three crew members inside the apartment. These workers, says Rao, are doing the work of nine people, from operating the cameras and monitoring sound to clearing dirty dishes. The staging requires an incredible amount of choreography in front of — and behind — the camera.

The resulting cross between the Food Network and live theater features careful food-centric cinematography intended to help viewers keep pace with the cooking, while still allowing Rao to lead a journey through his family history, including his thoughts on the troubling outsider status of immigrants in modern American culture.

Immigration provides complex subject matter, says Rao, adding that he is using the show to explore how he doesn’t fully understand his own story.

“What my parents went through, and the trauma of what they went through, and how that trickled down and impacted my sister and me as well,” Rao says of the prejudice and stereotypes his parents encountered — “that trauma reverberates for generations.”

A discussion about such things during a dinner party, says Rao, “would come up after a cocktail or two.” And so it does in “Bollywood Kitchen,” when you’ve poured your second Mumbai Mule and your chicken curry is simmering on the stove, Rao moves to his living room and begins to share some very personal thoughts.

The Geffen helped to write the book on interactive streaming theater, beginning with its hit magic show “The Present,” which featured master of legerdemain Helder Guimarães. The mesmerizing performance, filmed in Guimarães’ L.A. apartment, transported the tricks from his card table to your coffee table via a mysterious box of props sent to each ticket buyer.

A less peculiar, more fragrant box is being sent to audience members for use in “Bollywood Kitchen.” This one is stuffed with rice and spices essential to the dishes to be cooked by viewers alongside Rao during the show.

Tickets are sold in tiers. The top tier, called “Chef’s Table,” comes with one of Rao’s cookbooks and allows you to engage with Rao through Zoom during the show, which can be helpful if you’re having trouble with the recipes. The next step down, called “Bollywood Foodie,” comes sans the cookbook and Zoom connection, allowing you to watch Rao but leaving you to keep up with his cooking on your own.

A hot tip courtesy of former audience member Kris Andersson: He placed his computer on an ironing board so that he could watch the screen and the stove at once without getting food on his keyboard.

Andersson’s own one-man show, “Dixie’s Tupperware Party,” featuring him in drag as Dixie Longate, played at the Geffen in 2014. Since the pandemic shut down live theater beginning in March, Andersson has watched Stayhouse shows from his home in Ft. Lauderdale, Fla.

“I talk to theater professionals constantly, and people are still struggling and scrambling, trying to figure out how to make something work,” he says. “Right out of the gate [the Geffen] created a show that went so well. And now everything they present is a unique experience.”

Andersson is not a cook, he says, so he spent about four hours prepping his ingredients for the show. He emerged from his “Bollywood Kitchen” experience confident in his new skills and determined to cook more often.

“I went out and found an Indian market near me,” he said, adding that he’s ready to start working his way through Rao’s cookbook. “I’m going to do this — I’m going to set up my spice rack that I’ve never had before.”

This is exactly what Rao wanted for his audience, and he is hoping the interest lasts. In addition to realizing the dream of “Bollywood Kitchen” as a live dinner-theater experience, he is considering extending its life onscreen.

“I would love to see some sort of TV adaptation of it,” he says, “extending this idea of bringing immigrant food, stories and music together in a cooking show.”

When: 4 and 7 p.m. Fridays and Saturdays, through March 6