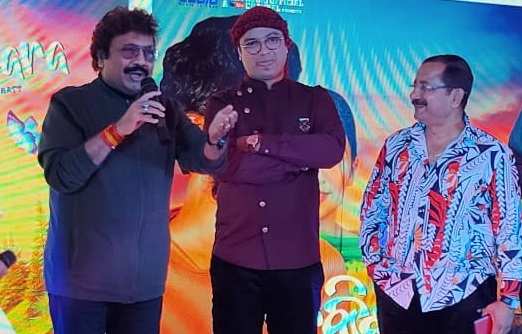 Yesteryear Bollywood hit musician Shravan Kumar Rathod last evening attended a music launch programme in the city. Shravan was part of the hit music composer duo of 90’s Nadeem- Shravan and both of them had given several super hit music in many Bollywood hit films.


Attending the event, the veteran music composer said that his long-standing wish of visiting the state got fulfilled. “I always wanted to visit Jagannath temple in Puri and I got a chance in this first ever trip to the state. This is a beautiful place,” said he.

On this occasion he also recalled his time with Nadeem Akhtar Saifi with whom he scored a lot of superhit music for Hindi films and how they became a phenomenon during that time. A collage of his works that was screened at the event, made the audience nostalgic and took them on a musical journey into the 90’s.

He also praised Odia singer Sourin Bhatt, who had trained under him and was happy seeing him doing good work for Odia film and music industry.Several people from Ollywood including filmmakers Sanjay Naik, Sthita Pattnaik and actor Abhishek Giri and several talents from the Odia music fraternity had gathered at the hotel to interact with the veteran musician and enjoy the event.

The veteran musician and the august gathering also celebrated Sourin’s birthday on this occasion.